InternshipUSA announces sponsorship of German Film Festival on October 22 and 23.

InternScout, Inc. is proud to announce its sponsorship of German Currents San Diego/Festival of New Films from Germany in San Diego, California from October 22-23, 2011.

For many years German Currents has been regarded as one of the most prestigious film festivals in the U.S. featuring films solely from Germany.

“We’re excited to see that this event, which is regarded as one of top foreign film events, has come to San Diego”,  said Steve Riedel, CEO of InternScout. “This is a great chance for our company, which has German roots, to show the people here how great German cinema can be.”

German Currents San Diego will kick off on Saturday, October 22nd 2011 with the opening film, “Almanya”, directed by Jasemin Samdereli, and a reception at the 226-seat Joan & Irwin Jacobs Theatre in the Museum of Photographic Arts in San Diego’s Balboa Park.  Guests will have the opportunity to meet and greet with actors and luminaries after each screening.  Tickets can be purchased online.

German Currents San Diego/Festival of New Films from Germany is made possible in partnership with the Goethe Institute Los Angeles, Lufthansa, Pacific Aviation and other valued sponsors. 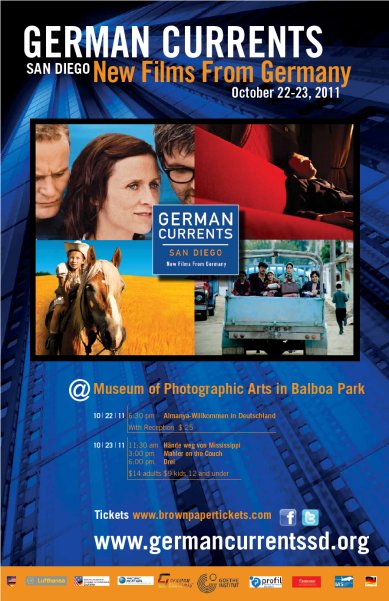